The Rim Trail in the Grand Canyon National Park sits near the south rim and is like all canyon trails, challenging at best. It offers access between the park's village and the southern most point of the rim. Many people find this one of the easiest of the trails and come back every year to partake in the wonderful atmosphere. Read More

Whether its views or just exercise that is called for, hikers cannot get enough of the Grand Canyon National Park's Rim Trail, which runs along the entirety of the south rim. The trail is a quick loop that leads back to the park village and entrance. Most can do it in one day, but others take the opportunity to enjoy overnight camping and really absorb the incredible scenery.

The trail begins close to Hermits Rest, a great viewpoint to start a hectic hike. In fact, most of the trail is paved and links up at varied points with the road again, allowing for weary hikers to hop on the many shuttle buses that run throughout the park daily.

The only draw back with the trail, as with all of the park's trails is that there is really no easy trail to be had. The Rim is the easiest, but definitely not one for taking children or wheelchairs on. In fact, every year the park has to deal with over two hundred rescues because people have either gone beyond their limits, not taken enough water, or simply slipped and fallen. Though falls are rare, they can be fatal.

Park staff recommend that hikers do not attempt to hike the Rim, to and from the village in one day. However, there are those that have done it. They are rare and very fit people. Most usually tackle the trail from May to the end of September, camping out in one of the routes many campgrounds, all of which require mandatory backcountry permits.

Another precaution that is needed with the Rim Trail is to only hike during daylight hours. Parts of the trail are very narrow and undulating. Some parts have steep descents or ascents. After rain it can also be slippery in parts, which requires complete concentration when navigating some of the narrow spots where sheer drops sit on either side of it. 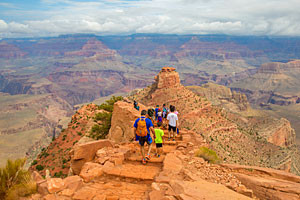